From Virtualization to Cloud Native - a Telco's Journey

From Virtualization to Cloud Native - a Telco's Journey 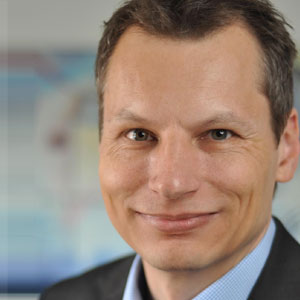 With cloud computing changing the way IT systems have been built and operated and new applications deploying much faster and scaling according to user demand, this new paradigm also has become one of the hottest topics for the modern telco world. Potential benefits of a fully cloud-native infrastructure, operations and application environment have become key drivers for transformation. Some potential benefits include:

• Enabling "pay as you grow" models and reduced up-front risk and cost of new services.

A cloud-native environment can support a telco's primary objective whether it be providing a better customer experience, coping with demand fluctuations across the network, cost reduction in operations of complex networks or shortening innovation cycles and developing new revenue streams.However, the journey to the cloudis lengthy as not only the technology must betransformed, but also new business processes need to be introduced – combined with the substantial mindset change required of the entire organization. 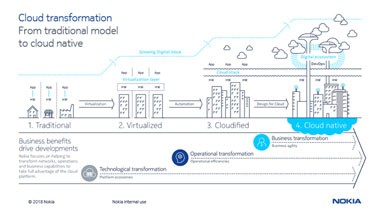 The technology transformation for the communication service providers can be described in three main steps:

1. Virtualization - Uncoupling the telco applications from the purpose-built equipment so that network functions and applications can operate on commercial, off-the-shelf hardware. This first technological transformation step targets platform economies, and started several years back. Even though this has been a very important step, the benefits with respect to scaling or network function and service lifecycle management have been rather limited.

2. Cloudifications – At this point operations begin to transform substantially, introducing a new, complementary set of management and orchestrations tools for scaling, resiliency, and managing the whole lifecycle of network functions and services on the cloud platform, with process automation emerging. This also enables new business and deployment models, like platform-as-a-service (PaaS) or network-as-a-services (NaaS).Though multiple cloud stacks are around and used for piloting and first commercial implementations, OpenStack has become the prime choice for the majority of communication service providers and vendors, driven by a mutual interest to incorporate and contribute to open source for common SW platforms where possible.

3. Cloud-native – at the final stage we see a ‘cloud-first’ mindset dominating, from the applications and services design and deployment to the supporting business processes. Network functions will be re-designed to become stateless, based on micro-service architecture, and functional in VM, containers or on bare-metal machines, allowing for maximum flexibility to flow with user demand and business needs. Cloud-native design is also key to fully leverage the resiliency of the cloud, achieving carrier-grade ‘five nines’ availability onnetwork service levels running on less-reliable cloud platforms.Openness also becomes key, leveraging not only open source or inner source but also providing open API’s for a new level of programmability that makes creating new services much easier.

And the operations? Changing from traditional networks to cloud-native design not only requires a change from vertical to horizontal organization but also leverages highly automated processes, closed-loop operations and zero-touch operations. This results in a much leaner organization for the operations of the network and frees up resources for more customer-centric tasks. New paradigms like DevOps allow communication services providers to gain agility, closing  the gap to OTT service providers.

How is this related to upcoming 5G networks?To realize new service principles of 5G a fully cloud-native environment is key but not vice versa. The orchestration of a multitude of network slicing without a fully automated operations and service assurance would economically not be feasible. 5G’s ultra-reliable low-latency communication demands architectural changes with edge clouds, with smart and automated orchestration systems distributing workloads between central and edge datacenters as needed.

Ideally, CSPs will have gone through most of the cloud transformation before starting the 5G journey.However, leveraging cloud benefitsextensivelyis even possible in today‘s mobile 2G/3G/4G as well as fixed networks environment, improving user experience and making subscriber service possible at a speed never achieved before. No matter the network, the time for CSPs to start their cloud transformation journey is now – and the first step is Virtualization.